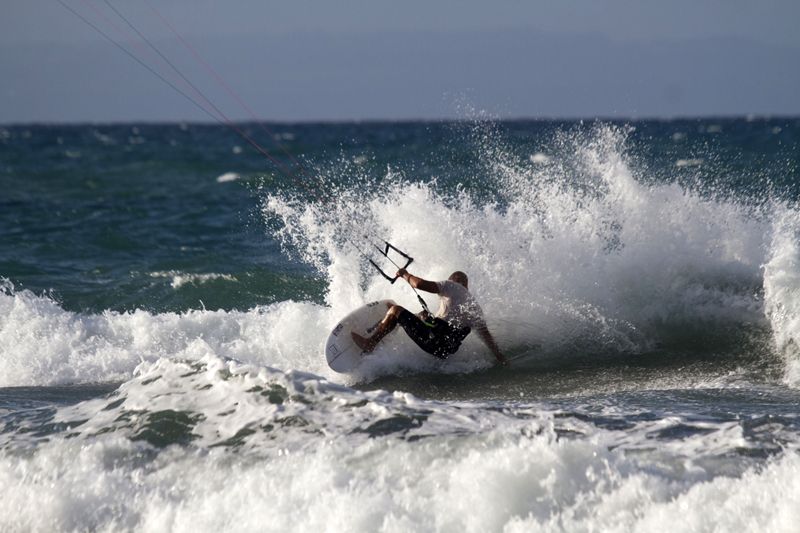 Beautiful waves break over a perfect reef in my dreams. Quickly the serenity of my slumber is shocked into reality by one of our car alarms having a seizure at six a.m.. Just when I think it has finally turned off, it turns back on. The contrast of the waves to the blaring alarm is enough to scratch your eyes out. After the 3rd ride around the decibel-screaming world, it finally stops.
Groggy eyed passengers rise from their slumber. Swollen eyed from too much rum and too many tall stories around the campfire till far too late. The sun is warm and feels fantastic against the skin. Philip sits off alone by the ocean facing into the sun on what turns out to be his morning ritual of intentions for the day. Like most of us, it revolves around the three W's: wind, water and waves.

Morning gruel is a feast of fresh fruit and cereals. Pineapples, papayas, mangoes, coconuts, and more are available en mass on the island for pennies compared to the rest of the world, and we take stock. Bananas don' taste like this back in Canada. It's almost like they are a different fruit. Post breakfast we join in a semi-circle on the lawn around Ian. Class is back in session and today's lesson is optimum kite boarding stance. With a finless board on the grass, Ian stands on his steed and proceeds to display the footwork of a master dancer in my type of modern dance. He explains how different foot positions for different occasions are necessary depending on your goal. Do you want speed, upwind ability, killer cut back power, the list goes on. The smallest differences in foot position can make all the difference between that epic barreled drop in, or becoming fish food. No ADHD in this group. Well, at least not right now. 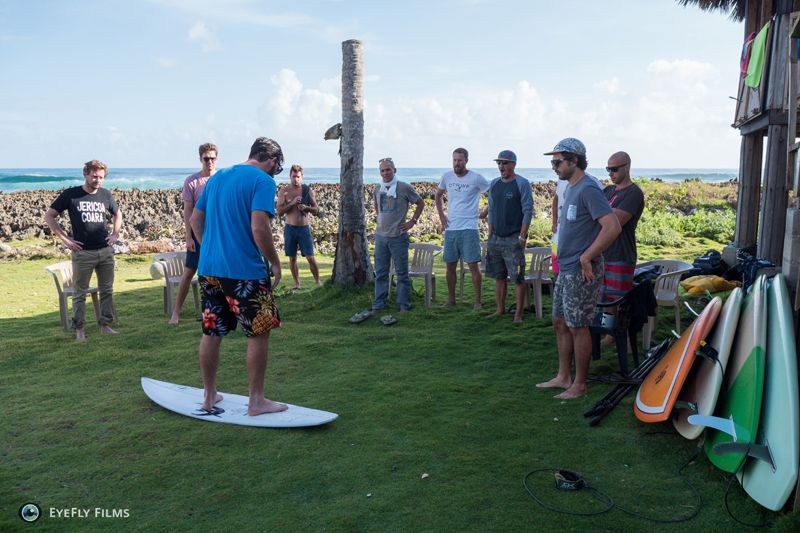 After some herding, we manage to get the team on track, gear loaded, we head out for the day of kite surfing. First stop on our day are the El Dudu caverns. The caverns are exactly that, an underwater cave system that create natural cenote's in the mountainside. There are many cenote's, but the main one features a zip line that carries you half way across the cenote with a forced drop some 30+ feet into the fresh cold water. As we are a group of testosterone, obviously one of us has to go. Juan is the first to strap himself into the roller coaster, and he doesn't disappoint. When he releases the bar he rotates a perfect back flip with a rip entry that would make Greg Louganis proud. Who's next? Quickly the atmosphere of machismo evaporates like the humidity in the air after watching Juan stomp his landing. 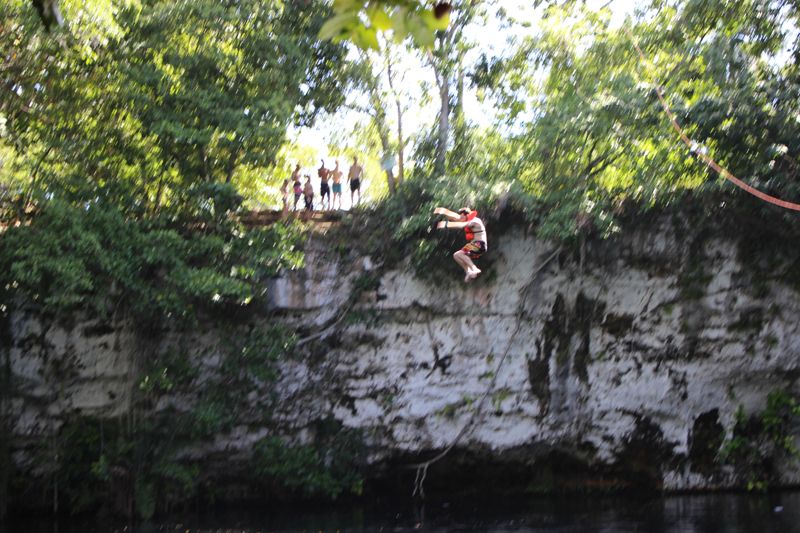 Cyril decides he's up for the challenge and diligently lines up the zip. Confident he can raise the bar over Juan he takes a running start, to his demise. The load exerted onto his hands when he finally lets all his weight drop was too much, too fast, and Cyril fell to his death. At least that's what we thought. It was a perfect ten back flop from 30 feet. It sounded like the loudest bitch slap that you ever heard. When he surfaced conscious, there was much rejoicing.

With a few of us sporting limps, we sit back in our faux leather chariot seats and head off to Comeda Francine for more Dominican delights. Mangu, BBQ'd assorted meats and the ever-present avichuela. 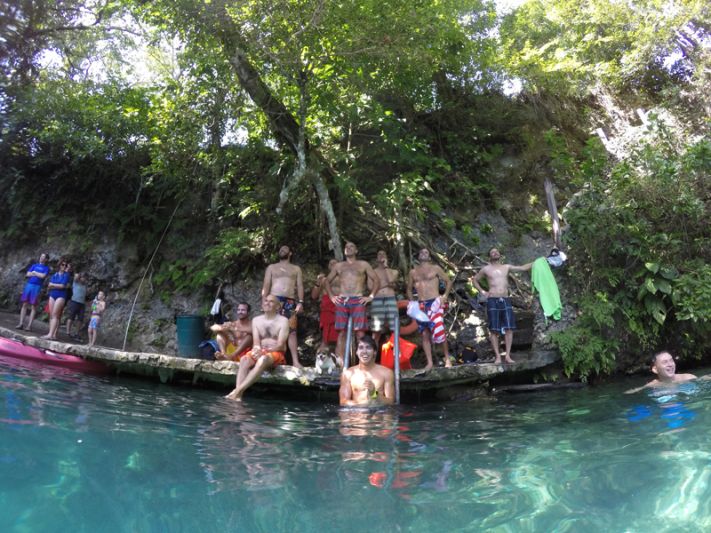 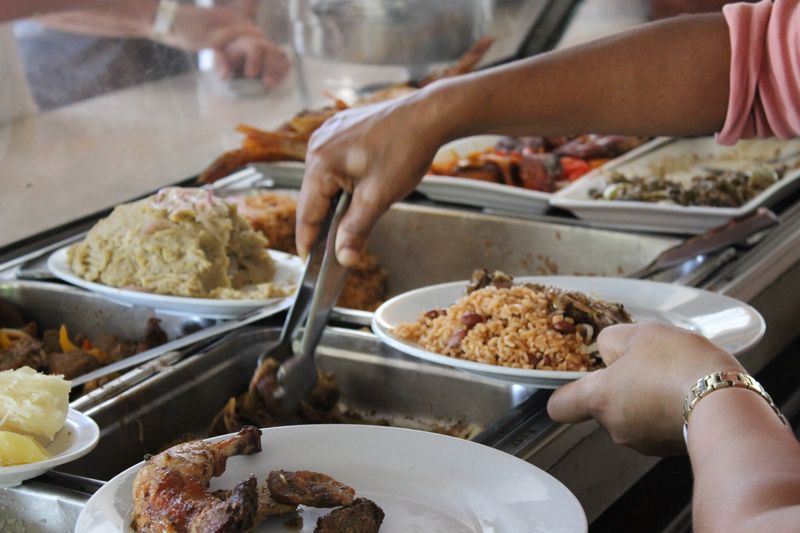 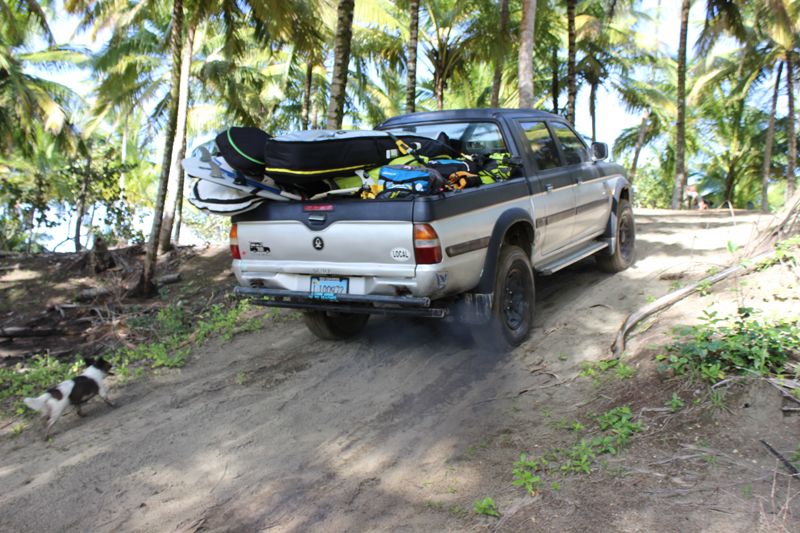 Rolling back down Highway 5 we take the most innocuous dirt strip off the side of the highway that drops into the jungle by the beach. How we knew to turn left at that turn off only Brandon knows. After slaloming a few palm trees, we arrive at what Oliver called the Nagua jetty. Now whether this is actually called the Nagua jetty or not, who knows. I suspect he's bullshitting me. Regardless it is an endless palm tree lined beach in the middle of nowhere, and it is beautiful.

The wind is light. Enough to get you excited, but not really enough to get your game on. Light wind is the perfect occasion to demonstrate advance kite flying skills. Ian pumps up and proceeds to give a lesson in kite flying technique. One of the top questions by everyone is self-launching and landing. I know many techniques already, but Ian doesn't fail to impress as he teaches me yet another way to self land my kite. Schools in session. 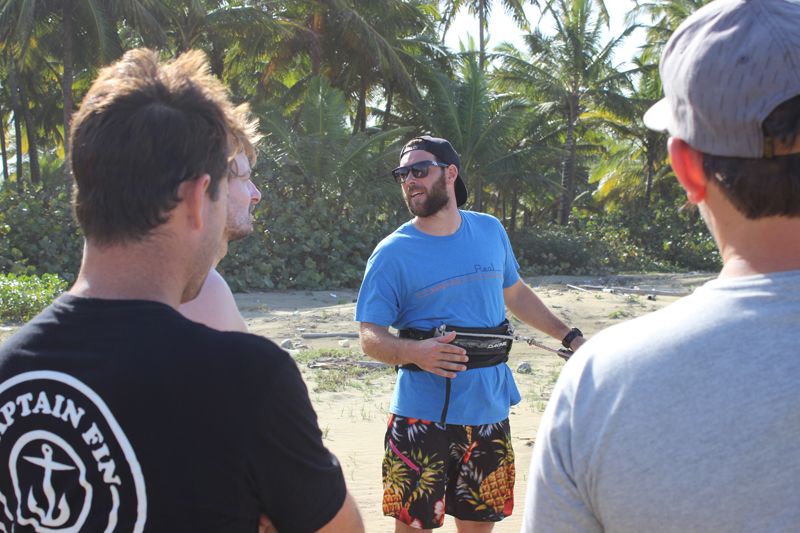 The wind is blowing, but right on the edge of rideable. We can ride out to the line up, catch one solid set and ride down the line for about five hundred meters before we end up at bozo beach, and have to walk of shame our way back to the starting point. Technically we're riding and having some great turns, but the upwind tack is more walk than a long tack. It reminds me of a game I used to play called just the tip. Fun, but not the goal. But it's what we have, so we walk that beach again and again earning our turns. 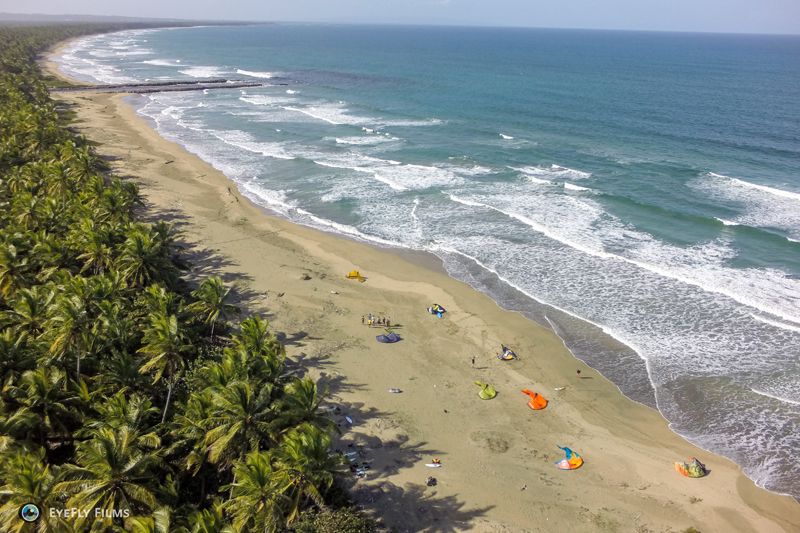 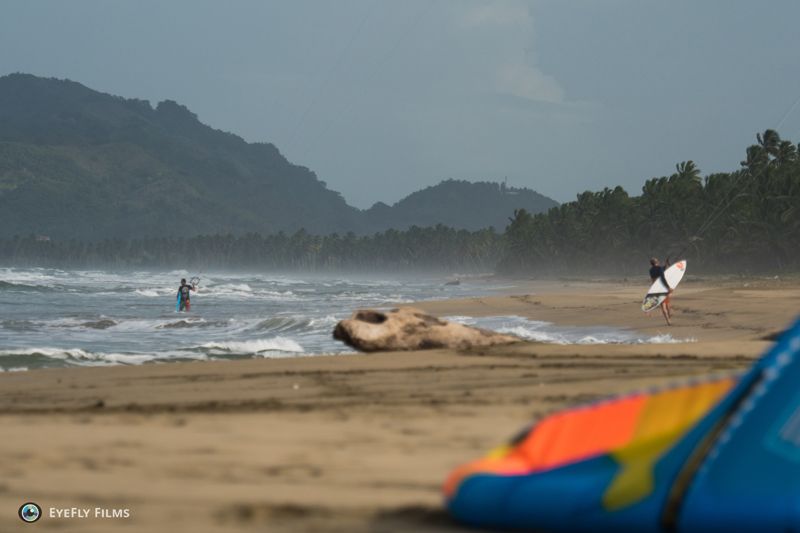 Like the previous day, we attract attention. This time it isn't the local hood gangsters, but the local military privates posted near by. Surrounded by AK47's and men in uniform, we all hoped that our gear wouldn't get confiscated for "military inspection". Lucky for us they thought we were sorcerers on flying magic carpets, which of course we are, and they were happy to sit back and enjoy the show. 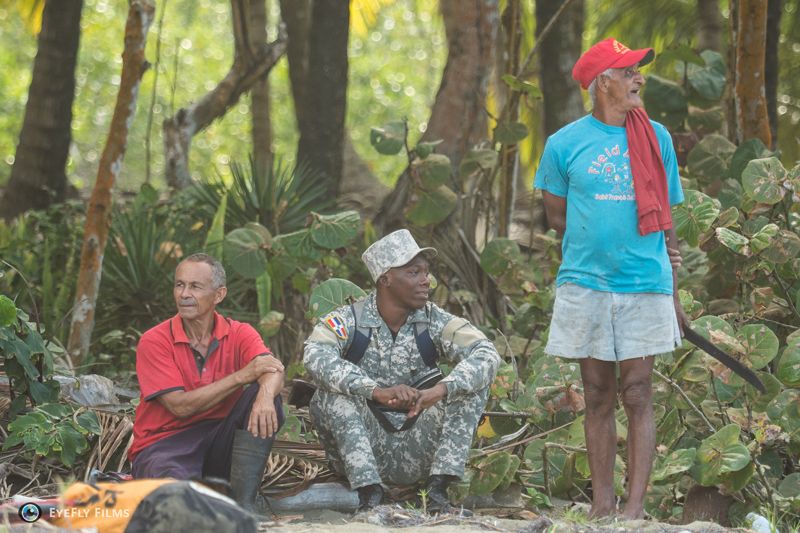 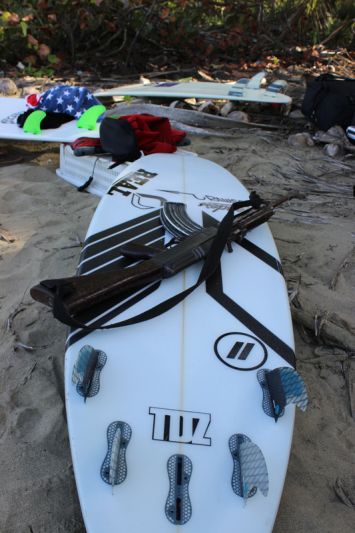 Loading up at sunset, we're satisfied, even if the wind wasn't awesome, the waves were. We can see the bonfire of the hut on the point from our jungle road as we make our way home. As we roll onto the grounds the smell of the BBQ being prepared by Roberto fills the air with grilled goodnesss. BBQ is the main staple of Dominican food, and we have more of it. Delicious pork chops and ribs fill the air with their smoky flavor. Dominican side dishes are the staple yucca and veggie sides, and what a surprise, avichuela.

Post dinner we settle into what will become our regular kite boarding ritual, drinks and smiles by the fire. The fire illuminates the lone palm tree with its golden red glow. Far from any city, the stars in the sky are the clearest you've ever seen. We are alone on the edge of the ocean, and it is beautiful.

One at a time we visit Ian on the second floor where he has assembled an "office" set up with a laptop, two chairs and a note pad. Oliver has edited video of our riding into short individual clips that show only what we need to see, slowed to fifty percent. Seeing yourself on film really shows how much we can all improve. In my head my strapless kite surfing style rivals Airton, Alldredge, Mitu, all the greats. On video, no so much. Schools back in session, and Ian is a PhD Prof. letting us all know where to improve.
As like the previous night, and all the following to come, we sit by the fire until one by one we slowly disappear into the night, and deep into our dreams. We look forward to another adventure mañana. 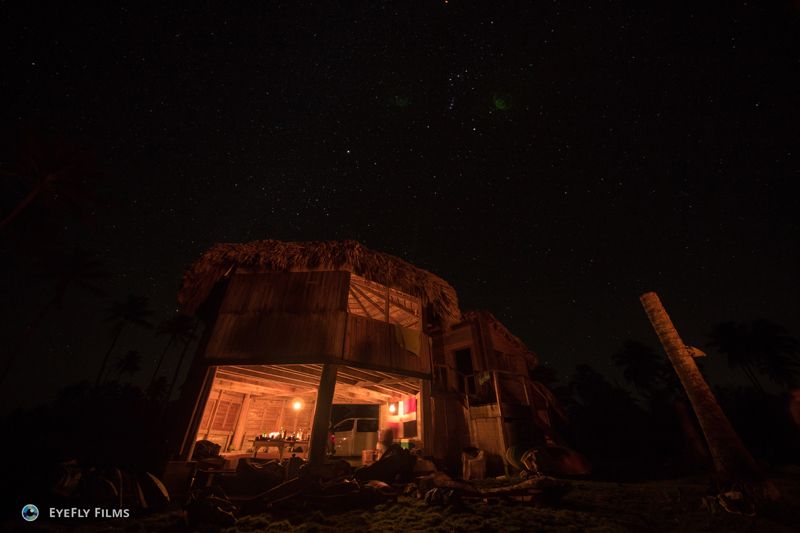