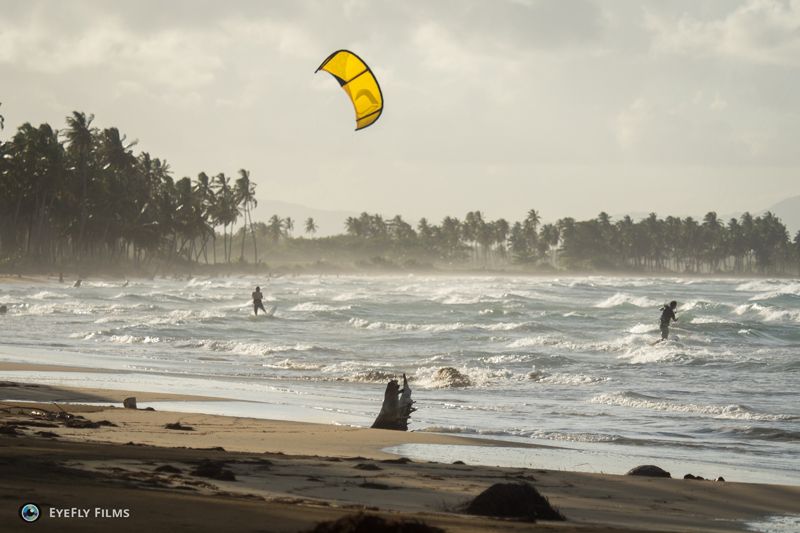 Once again the Mexican has stolen the Frenchman's sleeping bag in the middle of the night. How this happens, we're not sure. I suspect it happens when they're cuddling, but both deny any claims. It is more fodder for jokes.

Breakfast is delicious. Pancakes, bacon and eggs, yum!!. The wind is up already, and Ian takes a kite surf session right off the point of the hut. The waves are beautiful, thick and powerful. While he rides, we all take notes on his style. Trying to decipher his body positions and kite flying technique as he kills wave after wave. He's every bit as good as you think he is, and better. Watching his kite boarding videos is one of the reasons why I recovered from a severe spinal injury. I wanted to rip like him, and so I went to physio, and got back on a kite. To see and know him now, ripping in front of me made all those days at he hospital a memory. But that's another story. 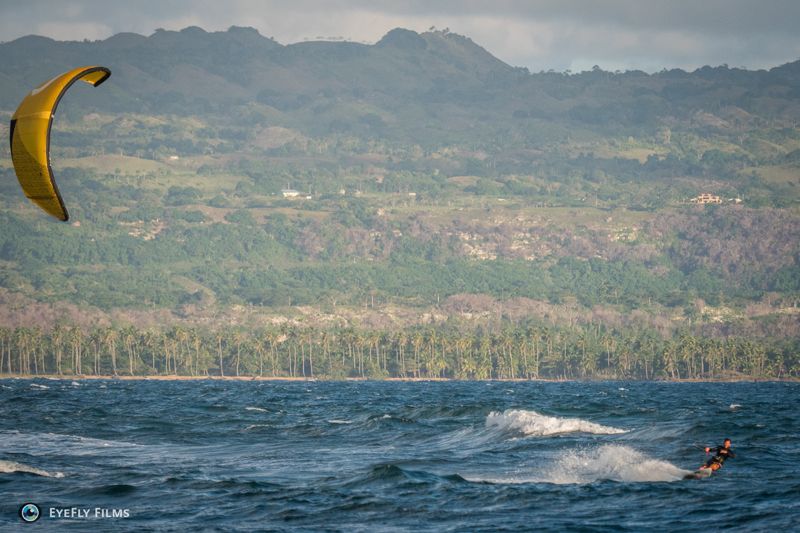 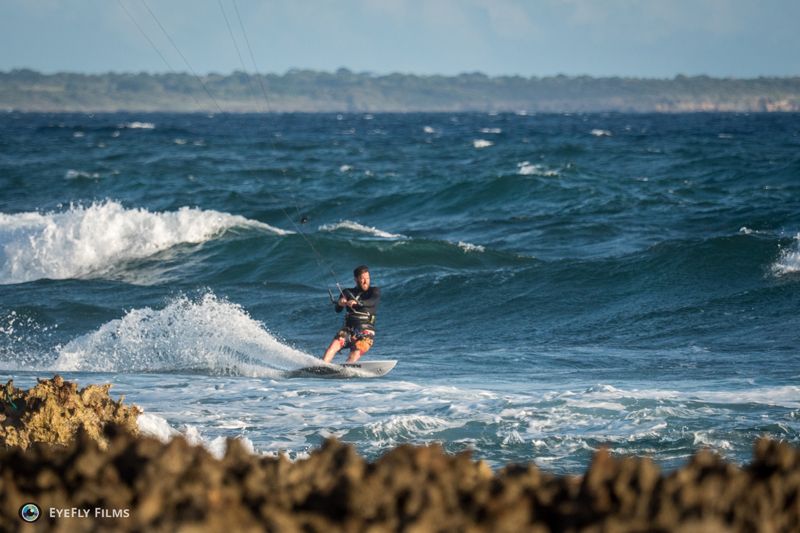 Locked, loaded, we roll out of the jungle with Morcheeba smoothly cushioning our cochlear vibrations over the sound system, and we're looking for trouble. We're eager to get on the water, and Mother Nature is eager to tease the shit out of us. For about an hour plus, we attempt to ride at La Entrada only to be shut down. The harder we try, the lighter the wind gets. Frustrating. So we pack up and ditch that spot like they were an annoying tag along, and make off searching for another district hoping for better luck. 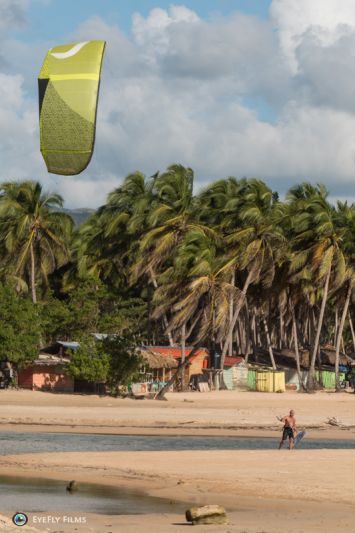 Rolling through Nagua you see daily Dominican life. This is more than half the reason to come on a trip like this. It is to see, taste, smell and feel another way of life. Karl and Ian from BWS have made a great choice in Brandon as their local fixer. Like Steve McQueen he's the man on the island, and we can't go wrong following his blue bat mobile. Even if he is a little Larry Lead Foot on the straight aways, he knows the back roads that I've been looking to find for the last two years living here. There are no street signs in the DR other than major roads, even then it's fifty-fifty. Like Bo Jackson in the 80's, Brando knows, and we follow past Nagua, we pull off onto a roadside beach that's long and wide. Here we hope that the wind will give us what we need. While we wait, we enjoy some terrible sandwiches. Gear pumped and ready to ride, mother nature it seems is not without a sense of humor. It's windy, but just under full rideable conditions. Like the previous day, we walk up wind to the point, launch and ride the waves down the line one lap, and then walk back up. Each one takes their turn entertaining us with their one-lap runs. Benny kept dropping his kite in the waves and we all laugh at him. He took one for the team and kept us smiling. Rock on Benny! 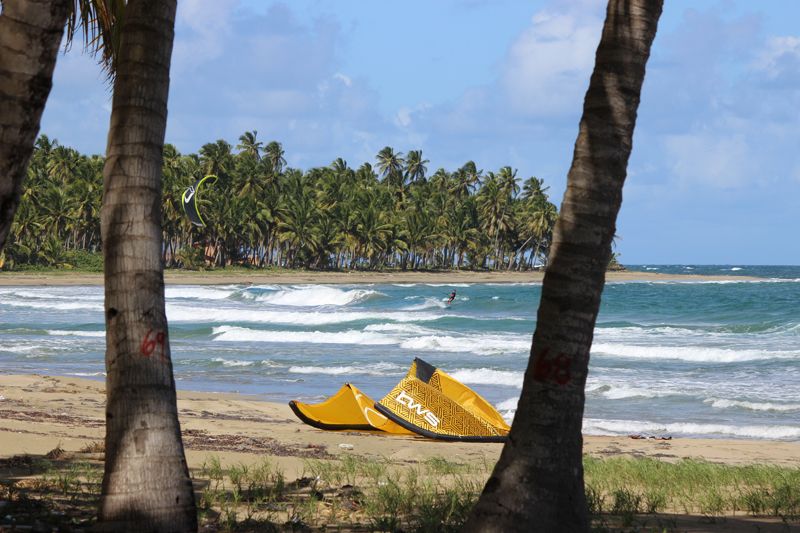 Time passes like paint drying, slow. The hard working financiers take naps in the sun under swaying palms. Sleeping under a palm tree on a Caribbean beach is exactly what the doctor ordered. Happy to get color so that when they return to London, they look like they've just come back from an expensive vacation. They follow Aristotle Onasis two keys to success. Get up early, and have a good tan. 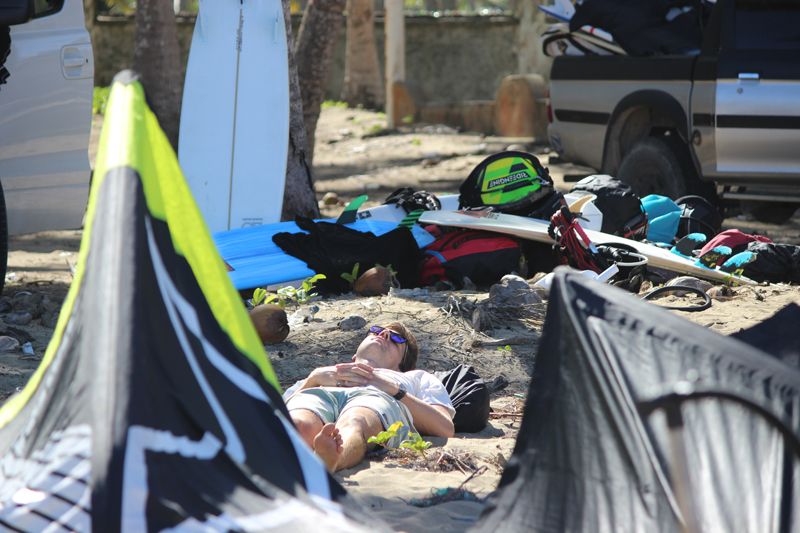 Even though we are frustrated with the wind, we are entertained. A group of school children have taken a liking to Ray, Juan and Chris. Fluent in Spanish, the men make jokes with the kids and they make us laugh. Most Dominicans are terrified of dogs, and most Dominican dogs are racist because Dominicans kick them since puppy life. Nacho is no exception. She'll charge a 7 foot 300lbs man without fear, but in reality at ten inches off the ground and a whopping 14lbs, she's pretty harmless. She'll chase and bark up a storm, but doesn't bite. This makes her the perfect dog for a favorite game of mine called Nacho Hand Grenade. It consists of throwing Nacho into a large group of kids, where upon landing Nacho barks like Cujo tearing after their ankles. All the kids scatter while laughing hysterically as they run away. Highly entertaining. I recommend you try it. Racist dog not included. 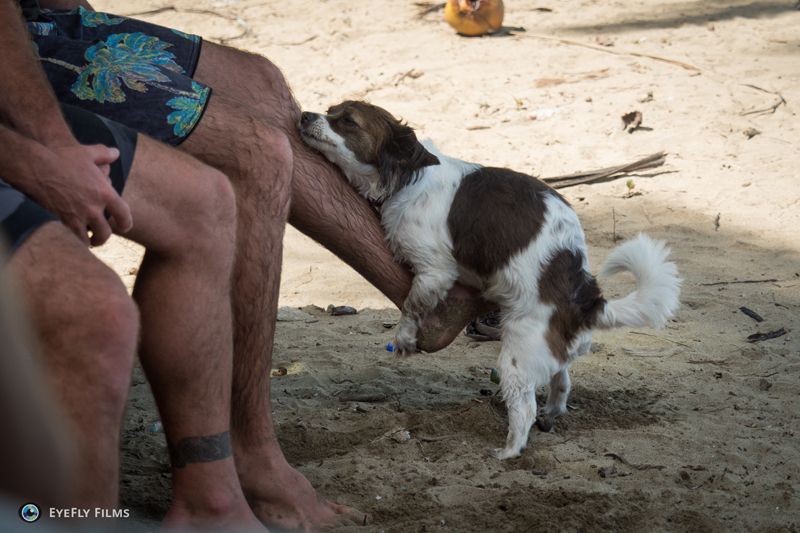 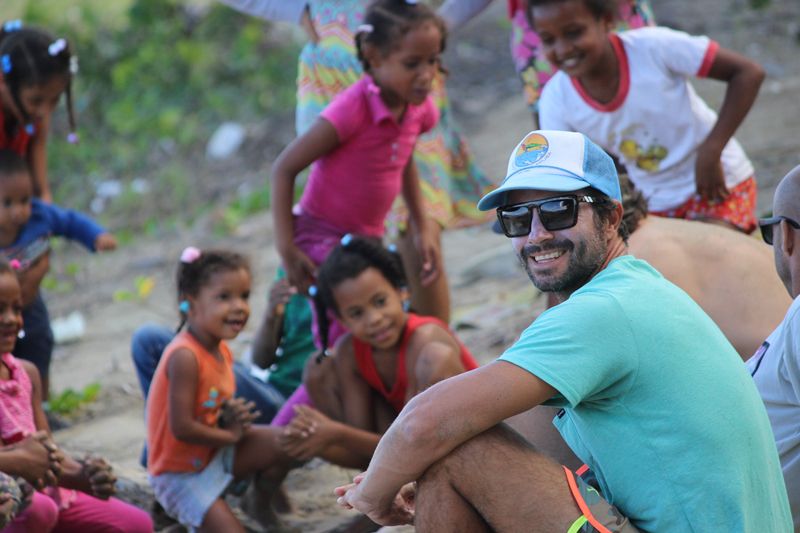 Bored grown boys, spare time is devil time. Chris and Juan find a ping-pong ball and realize if you throw it like Roger Clemens at naked skin, it leaves a nice red welt. We've descended into junior high. Thank goodness the car crash put that game to a halt.
Careening over the shoulder, a woman with several kids on board can't manage the curve on the highway at her Andretti like speeds. All we hear are the tires screeching across the concrete as they leave their yaw imprint like a sports stars autograph on the roadway. As I turn my head I see the four by four catch air off the lip, plunge into the dropped shoulder, flip twice, and smash head first upside down into a forty foot palm tree. Kaboom!! Like emergency personal on call, we all hop to our feet and rush over to see if everyone is OK. We are relieved to find all occupants alive, and relatively unharmed. Soon the highway comes to a stop as all cars pull over to see what happened. It was quit a spectacle. 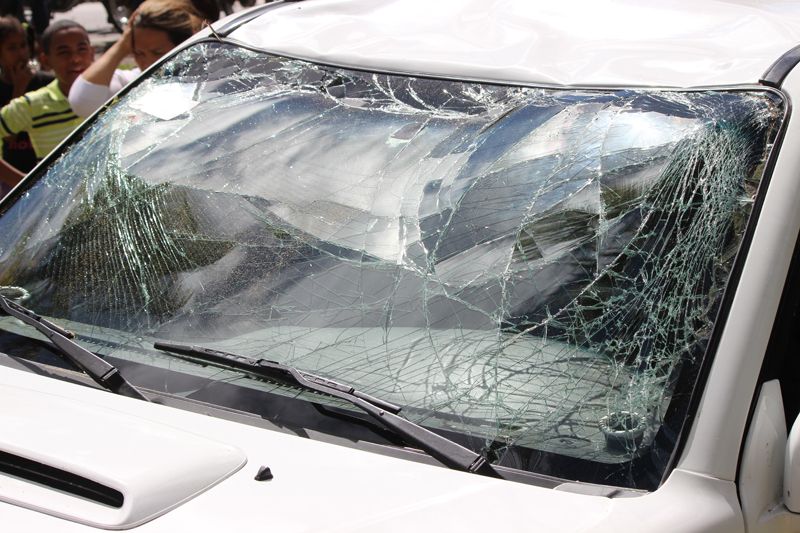 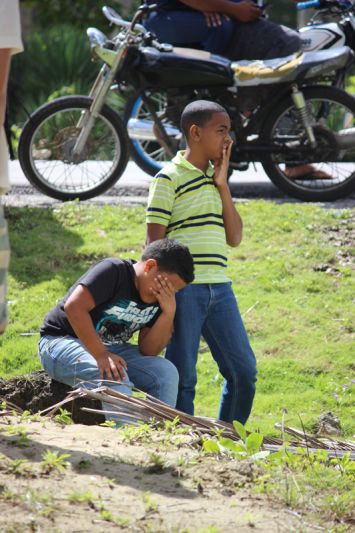 While the rest of us are distracted, Ian with his eye always on the prize notices that a wind meter twenty kilometers away is reading almost twenty knots. That's what we're hoping to hear because it's only blowing twelve in our faces, and the boys need wind. Brandon, Benny and Ian jump in the truck and are off for a reconnaissance mission. Twenty minutes later we get the call, "It's blowin!! Pack the kite surf gear and we'll be there soon to bring everyone back." Up and at attention like a well-trained platoon, we have our rucksacks packed and loaded right on time for the cavalries return. Twenty minutes later, we're at the spot, and the boys didn't lie. She's blowing hard, and we're all grinning ear to mother fuckin' ear. 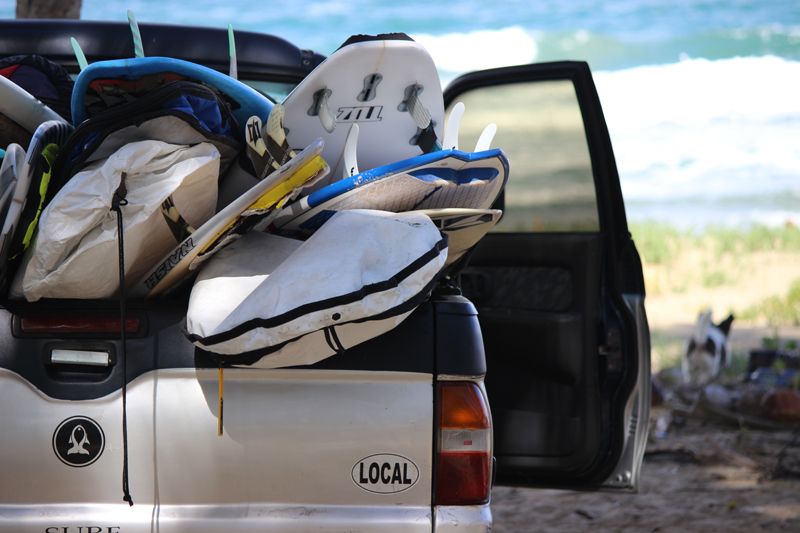 The beach is full of character. Half broken palm trees line the forest and beach. The sand has a black veneer under the golden brown. It almost feels like this part of the coast had a great fire long ago, and this is the edge of the rebuilding jungle. The beach break waves are fantastic, and my eight-meter Slingshot Wave SST is pulling me like a champion through the blue skies. We're cooking with gas now! 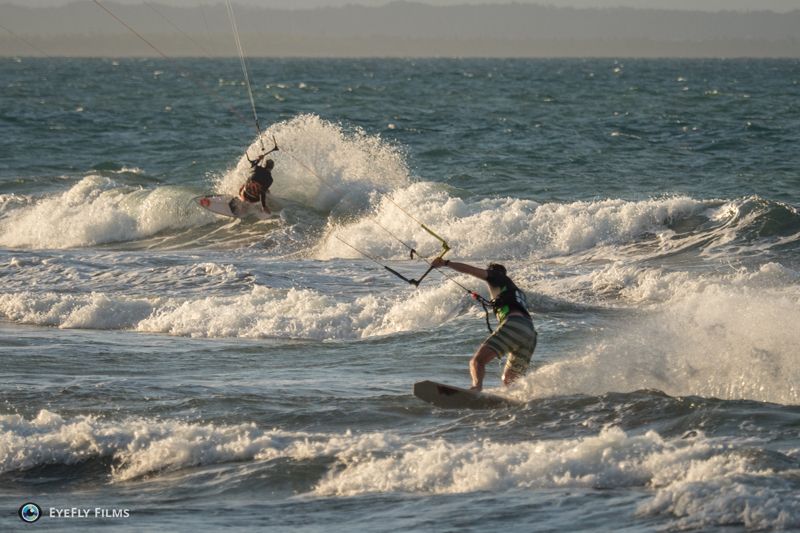 The session is amazing. Ian, Karl, Benny, and the entire crew hit the water and it's show time. Killer cutbacks, multi directional rolls, low fives all around. We take turns running the shore break putting on our best show as Oliver has the long lens out, and this is prime time to get video footage for coaching. Half way through the session Ian goes to shore so that he can watch us better and also take photos for coaching. We kite surf till sunset, and are content like Cheshire cats having caught the bird. 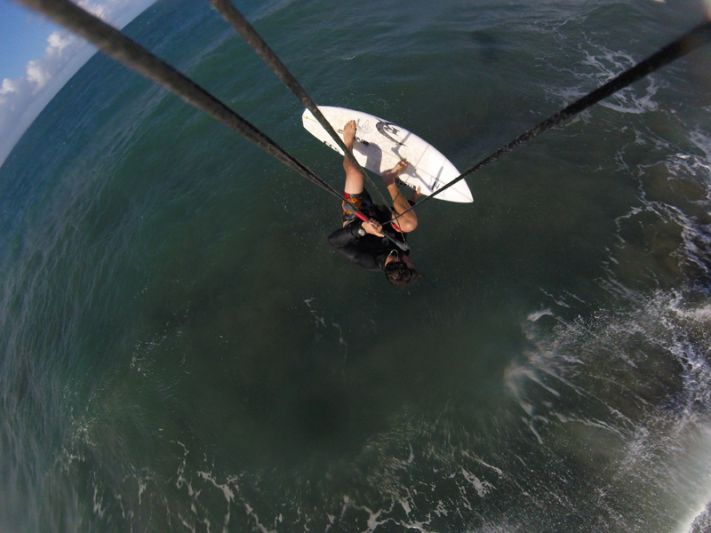 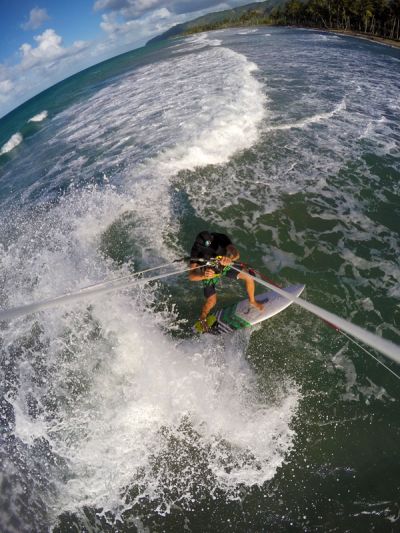 Rolling back through the first campo we stop at the local colmado, grab several cold liters of beer, and celebrate a highly entertaining day. The local drunks love us and entertain with their dancing. One thing I love about latin countries is that the people have serious dance moves. Even better when their three sheets to the wind. 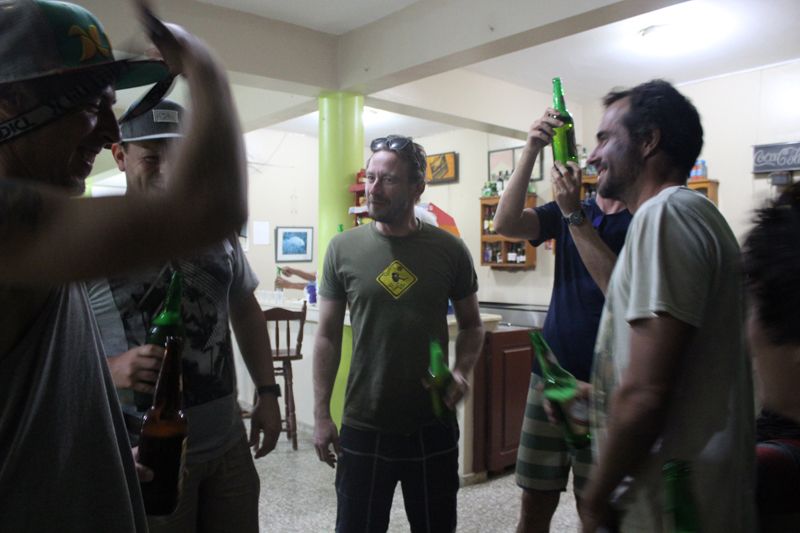 Arriving at the house we have the meal of the trip waiting for us, Langoustines and fresh fish dinner with all the fixing. Brandon breaks out two massive, and I mean massive bottles of Rum to help wash down our seafood feast. And then he realizes he forgot his dog Preciosa at the colmado. Doh!
Tonight it is raining. And if you ever experienced a Caribbean down pour, you know that when it rains, essentially an ocean falls out of the sky. Huddled close under the shelter of the hut, we talk late into the night and hold our rum close. 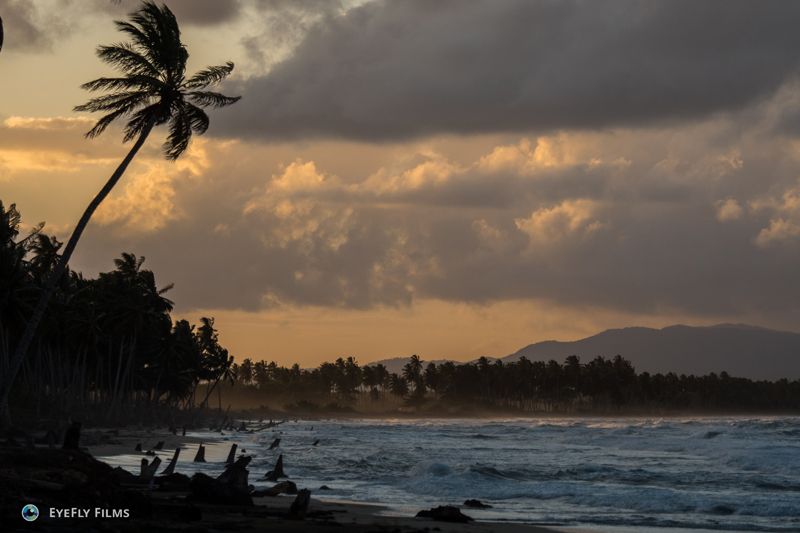