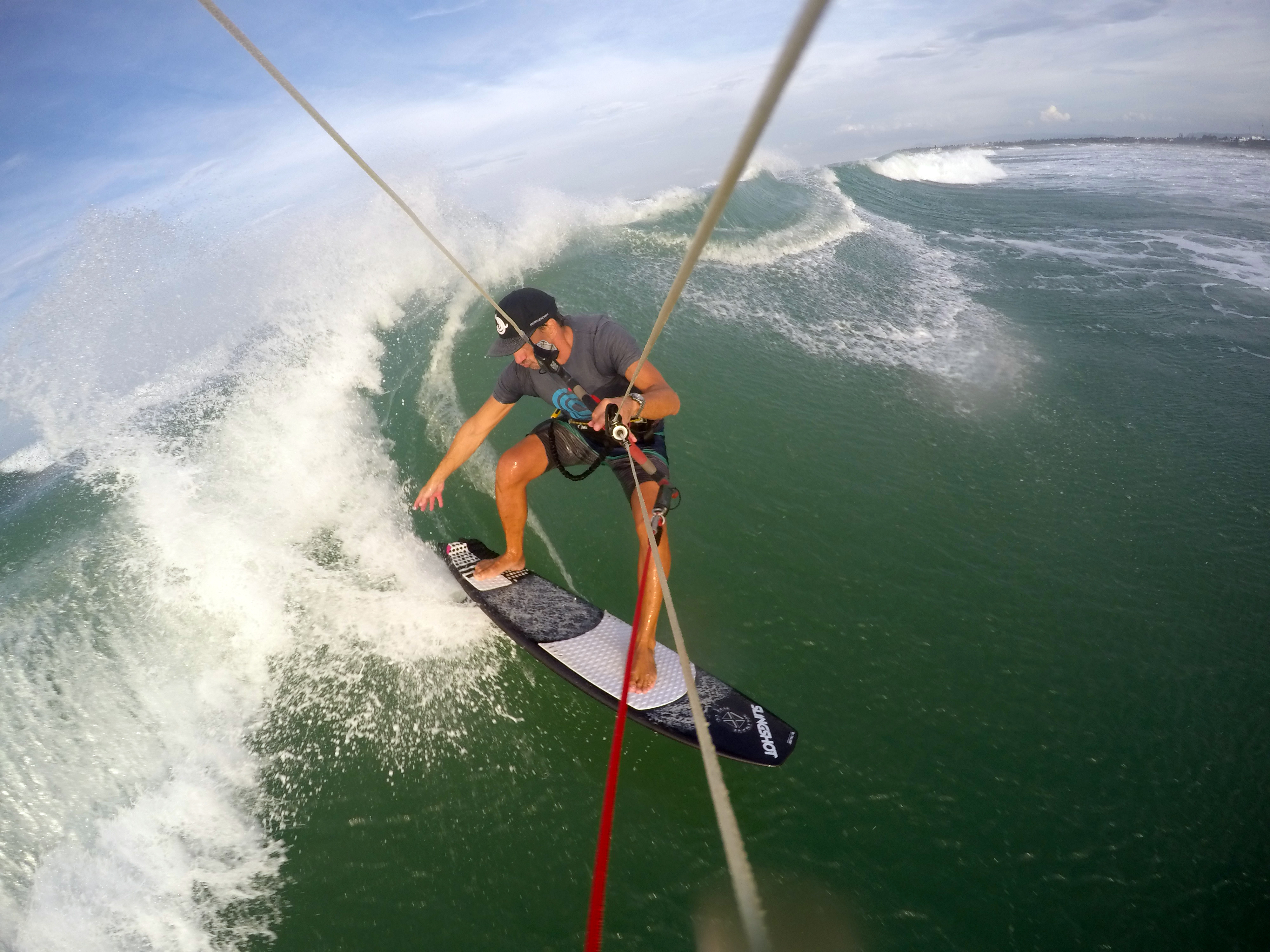 It was just past 6 a.m. when the sun began to give light through the thick layer of dark cloud. I could see the ocean out of my bedroom window, and she was angry. Nervous with excitement my girlfriend jumped out of bed, “Irma’s here! Irma’s here!” Irma was indeed here, and the party was just getting started.

10 days before Irma reached our shoreline I saw it appear on NOAA satellite imagery. Still just an infant storm, like Sauron, her eye was fully developed and all she needed was a body to unlock her devastation. I knew then that by the time she reached the Caribbean, we’d all better take cover for she would bring death and destruction. 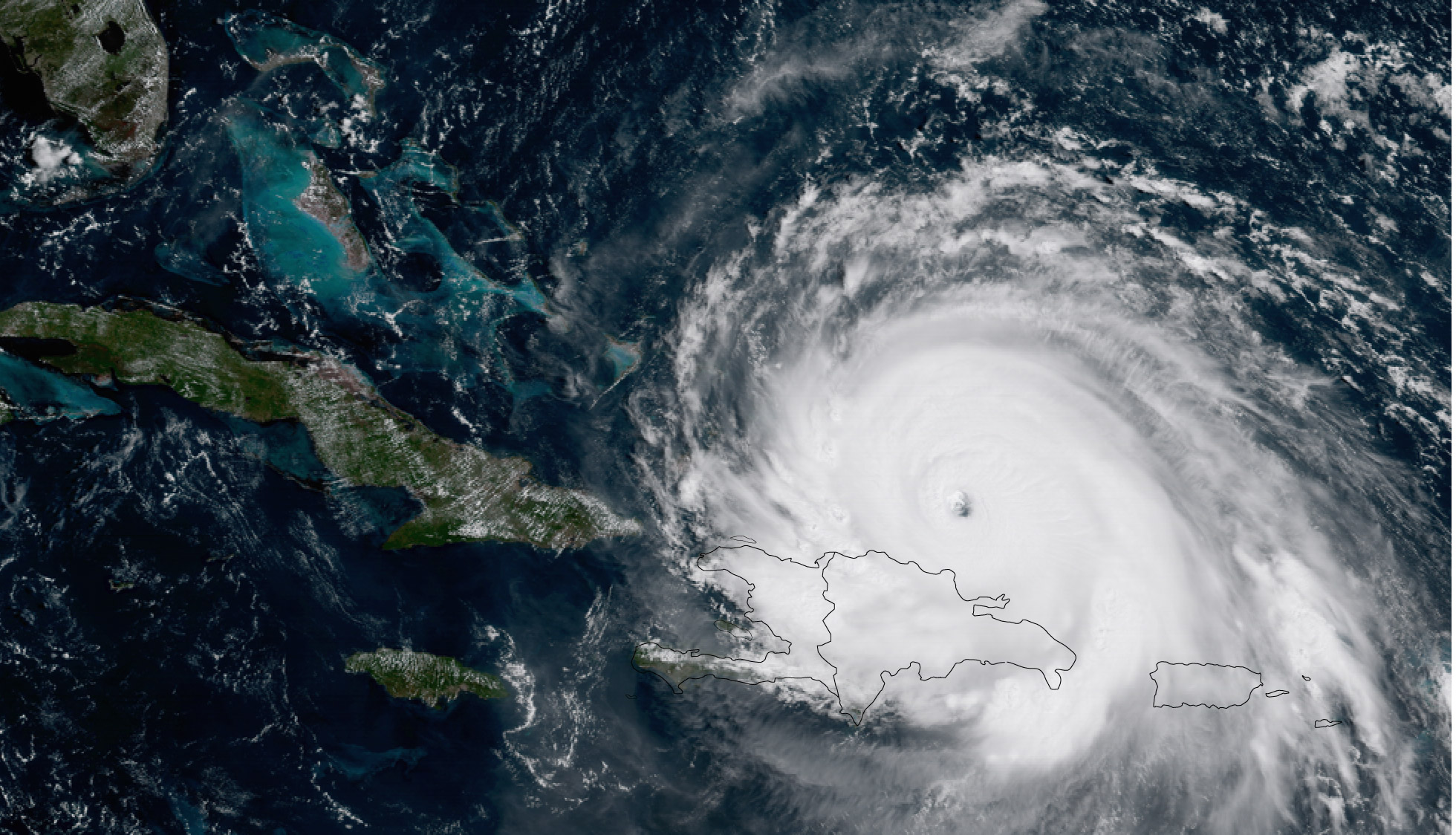 Sunday, 4 days before the storm is to reach Cabarete, and I’m already in the Super Pola grocery with a survival list of groceries that need to be procured. Non perishables are tops on the list, as is survival gear. I need food that doesn’t spoil, and a way to cook it if all the power goes out. My shopping cart mounted above the top, I still worry that I don’t have enough. Let’s get more food. Worse case, we eat a lot of home cooked meals for a long time after Irma’s gone. Let’s also refill the gas canister for the barbecue while we’re at it.
Before I left home to go shopping I gave my machete to the gardener and asked him to sharpen it. He asked what for? Protection; for when chaos reigns after the storm has passed. At first he looked confused, wondering why I’d need protection. Then I explained the size of the hurricane coming towards us, the possible damage it can unleash on our small seaside town, and how food and water will become more valuable than life if we are destroyed. When I got home from shopping, my machete was sharpened like a new razor from Gillette. So was his own machete.
Eight five gallon jugs of water sat at the front door. 40 gallons of fresh water for drinking. Before the storm arrived we filled several more old five gallon jugs with tap water, as well as the bathtubs to the rim. Have you ever been in a water shortage before and had to flush the toilet?
We had food and water to last two weeks. Machetes, matches, flashlights, first aid, boarded windows, and three guards with shotguns. We were set for what ever comes. But you never know what to expect when the biggest storm in the history of the Atlantic is bearing down on your little fishing town.
Plan B. You always need a plan B; in life, and especially in a hurricane. And particularly when your house is less than 100 meters from the ocean. Our plan B was to get the flock out of dodge if we needed, and go to the south side of the island, out of the direct path of the hurricane. So we rented a room in Santiago and prepared for a quick getaway if necessary.
We waited and watched. We watched as she morphed from a category three, to four, and quickly to a category five monster hurricane. Her eye grew in size and was becoming even more defined. The hurricane was now bigger than the island of Hispaniola, and she was headed right at us. Every hour I checked the NOAA satellite images, Windy.com modelling, Spaghetti Models, anything and everything I could get my hands on. Four years of living in Cabarete and watching weather, I obsess over watching how the Atlantic and Caribbean interact, and how storms cross our path. Now I get to see if my theories are complete shite or not. My life may depend on it.
Twenty-four hours before Irma was to touch down in Cabarete, she first had to cross Puerto Rico. This was our litmus test. We’d seen all the windward islands get destroyed, but we could also see that Irma’s path was now projected slightly north of the DR. How north? That’s what the Puerto Rico crossing would tell us.
At 3pm on Wednesday the eye of hurricane Irma was over Puerto Rico. It looked devastating. But the eye was north of the island. This was a good sign for the DR. If the eye was north of PR, the hurricane would run north of the DR. It looked like we’d avoid a direct hit, but we’d still get hit. The question was, how bad.
Knowing the eye of the hurricane would pass north of us, we decided to stay in our home and weather out the storm. Our building is rebar reinforced poured concrete on a massive concrete floating pad. It’s not going anywhere. Our apartment is elevated almost twenty feet, and our generator is waterproof. Our belief was that at worse we’d see a storm surge that would flood the area. We were prepared for that.
Before the storm surge, there is the storm suck. The water is sucked back towards the approaching hurricane as it sucks up all the water towards the eye. Just before dawn almost all the water had been sucked out of the bay on kite beach. The beach went from 20 meters wide, to over 100m wide.
By lunch time Irma is pulling up a chair at the table and helping herself to anything she wants. Watching from the safety of my balcony, the winds begin to increase in speed and power, the ocean began to swell. A fierce turbulent wind raged from the south west, blowing all the trees in the opposite direction of the normal eastern trade winds. Not made to swing the opposite direction, the trees began to snap and explode under the pressure of the hurricane winds. 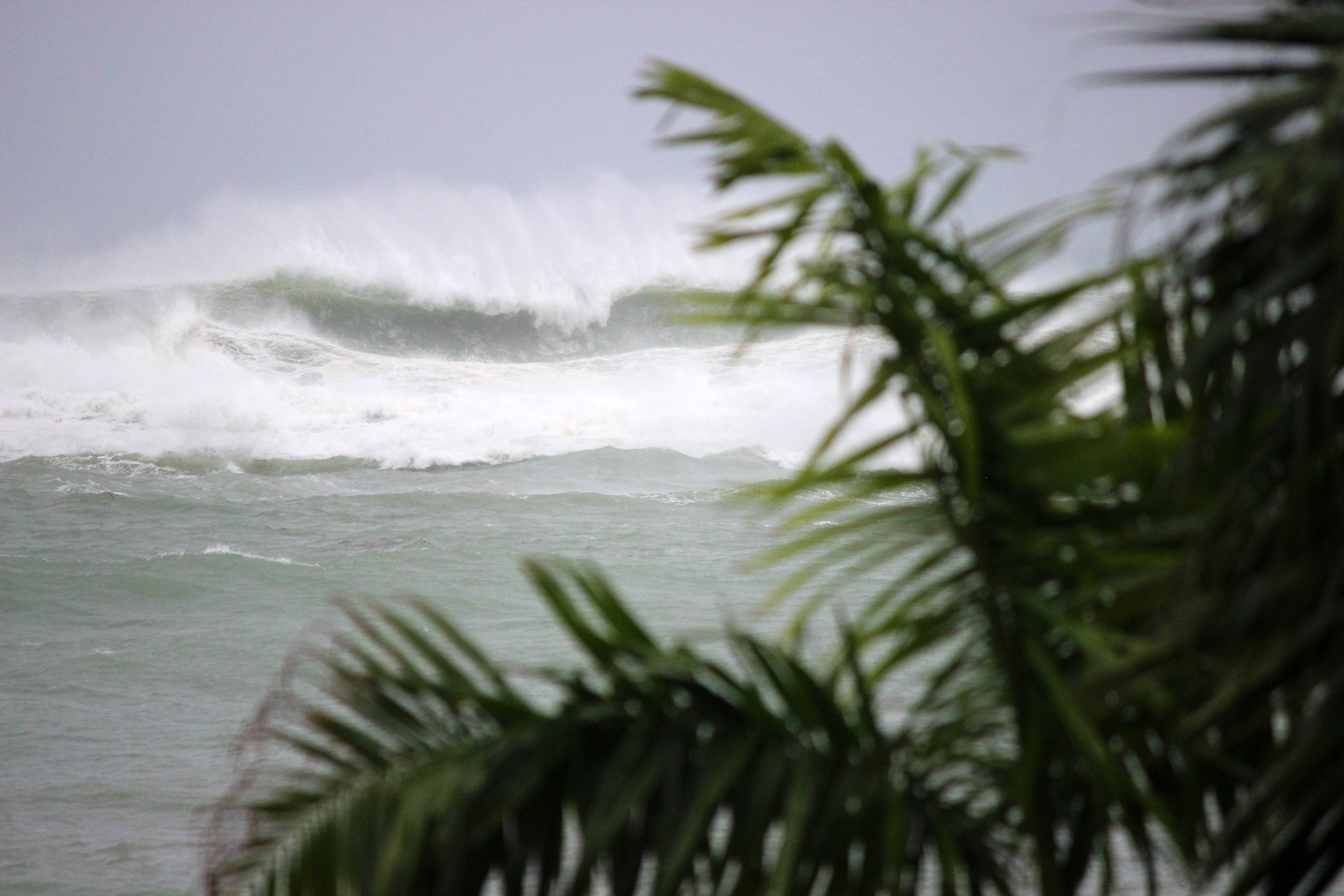 When the storm surge arrived it looked like the ocean was growing, swallowing everything in it’s path. To watch the ocean swell, to see the entire horizon suddenly get higher and start eating land was one of the most powerful displays of nature I’d ever seen. Like an avalanche, there was no match for the power when she made her move, and nowhere to hide. She ate everything.
The winds screamed and howled like banshees in the night. The clouds black and grey sat heavy blocking out the light. The ocean tossed itself into a violent rage. Through my binoculars I could see the monster waves break far back of the reef. Waves faces well over forty feet tall detonate in the distance. Their faces peeled off from the 60 plus knot offshore winds. Perfect monsters barrels that made me wonder if I’d soon see Bohdi out my window trying to slay one of those dragons.
If you ever wondered what a hurricane sounds like from shore, imagine a jumbo jet taking off full thrust, the bass and thunder changing the air pressure so you can feel it in your chest. It sounds like that, but the sound never stops. Boom goes the dynamite.
By night fall the eye had passed and a few of us ventured out onto the beach to see the damage. The majority of the destruction was wind damage. Trees were torn to pieces and strewn all over. Debris from the ocean was also the major mess. But a nice surprise was the storm surge dumped a tremendous amount of sand onto kite beach, more than doubling the width of the beach. Kite beach hasn’t look this good in months.
Was it luck that Irma passed north of the DR and we survived the storm surge? Yes & no. Cabarete survived because of the hour of high tide, and our protector Pico Duarte.
The Dominican Republic creates it’s own weather. In the center of the island we have the highest mountain range in the Caribbean with the grand father of all mountains Pico Duarte with an altitude over 10,000 feet.  The Loma Isabel De Torres mountain range and Pico Duarte create enough pressure that they push all storms out to sea. It’s been like this since the Taina people ruled this land centuries ago.
Among many factors that helped spare Cabarete from Irma’s destruction, the tide was a major contributor. The night before the storm it was the full moon. The fuller the moon, the more dramatic the tides. When Irma’s full force hit Cabarete mid day Thursday, it was low tide. Even at low tide the storm surge breached our beach front break wall and rolled over our pool. But that’s as far as she went. If the tide times were reversed and it was high tide when then storm surge hit, I have no doubt all of Cabarete would have been several feet under water, all the way to the back barrio’s. Dodging the storm surge bullet was pure luck. 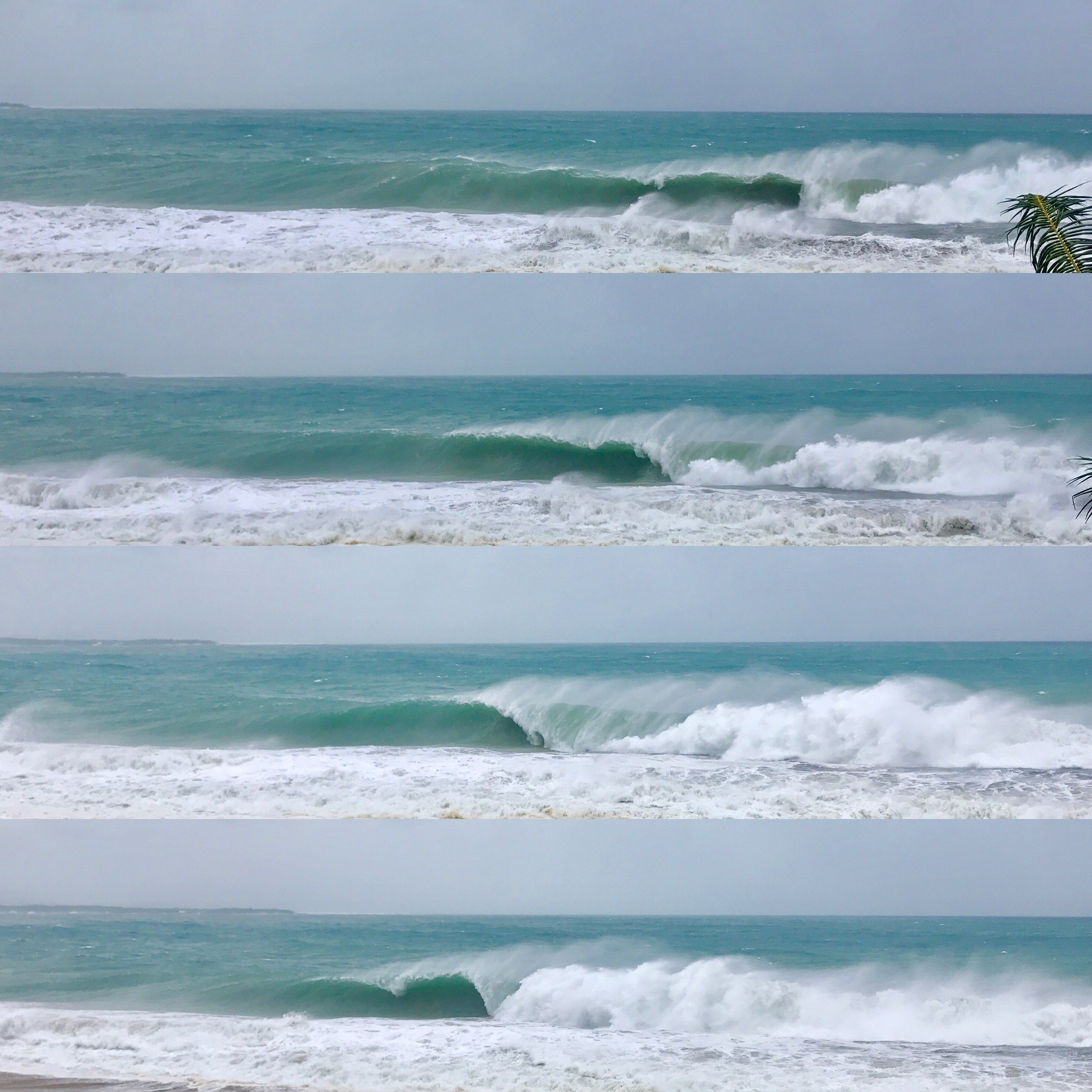 We had all survived. Irma was a beast, but she kept her distance. Now all that was left to do was clean up, and enjoy the left over waves. And did we ever enjoy those waves. 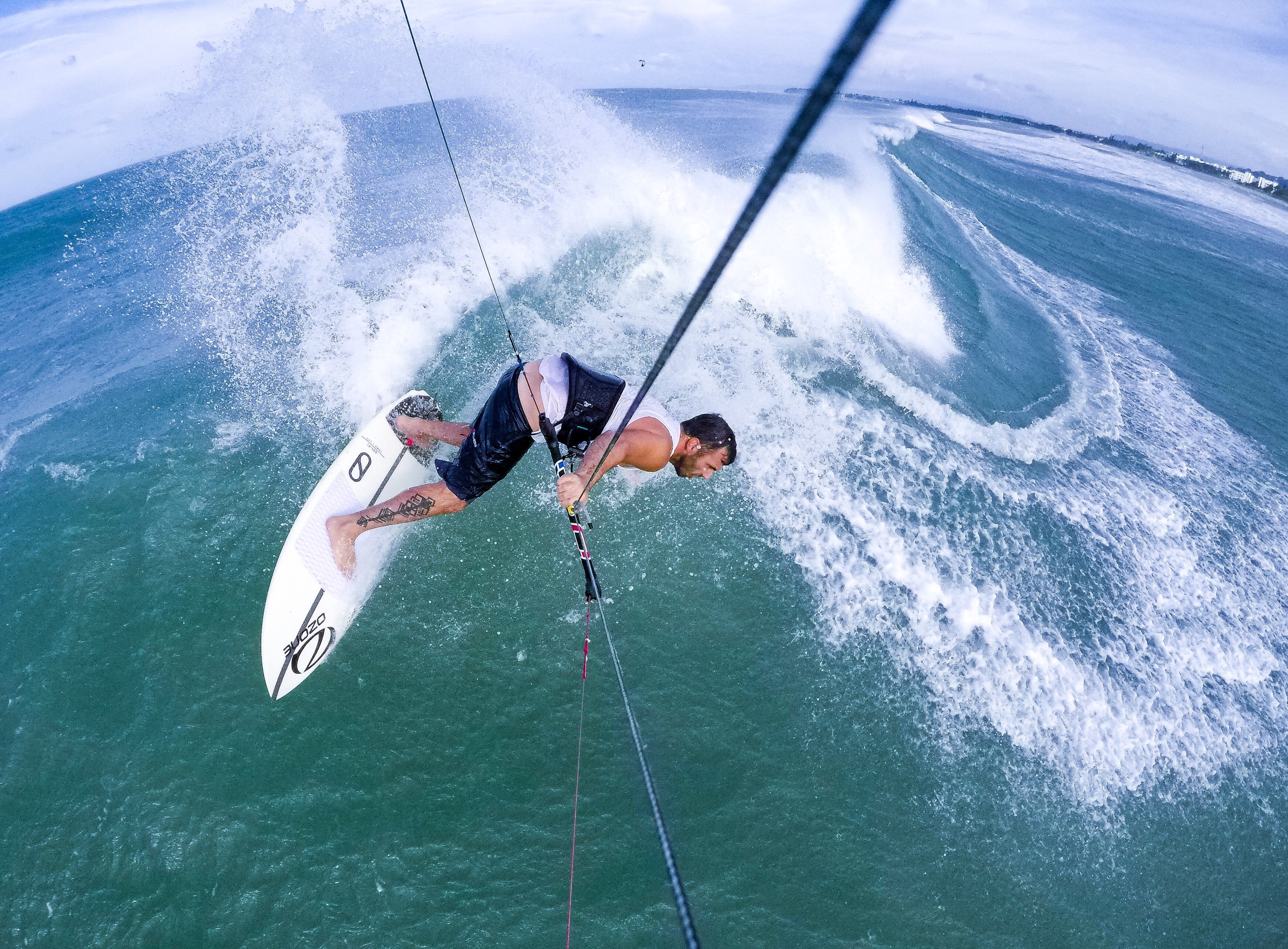 Friday, the day after Irma, it was a beautiful day. Irma had moved onto Cuba, but she had left behind a whole lot of side offshore wind and some pretty big waves. There wasn’t one kite surfer on the water all day, and then I got the call. It was my mate Oron Kessel on the line, and he’s talking my ear off about how we have to ride because it’s 30 knots side off wind, and we gotta take advantage. He was right. 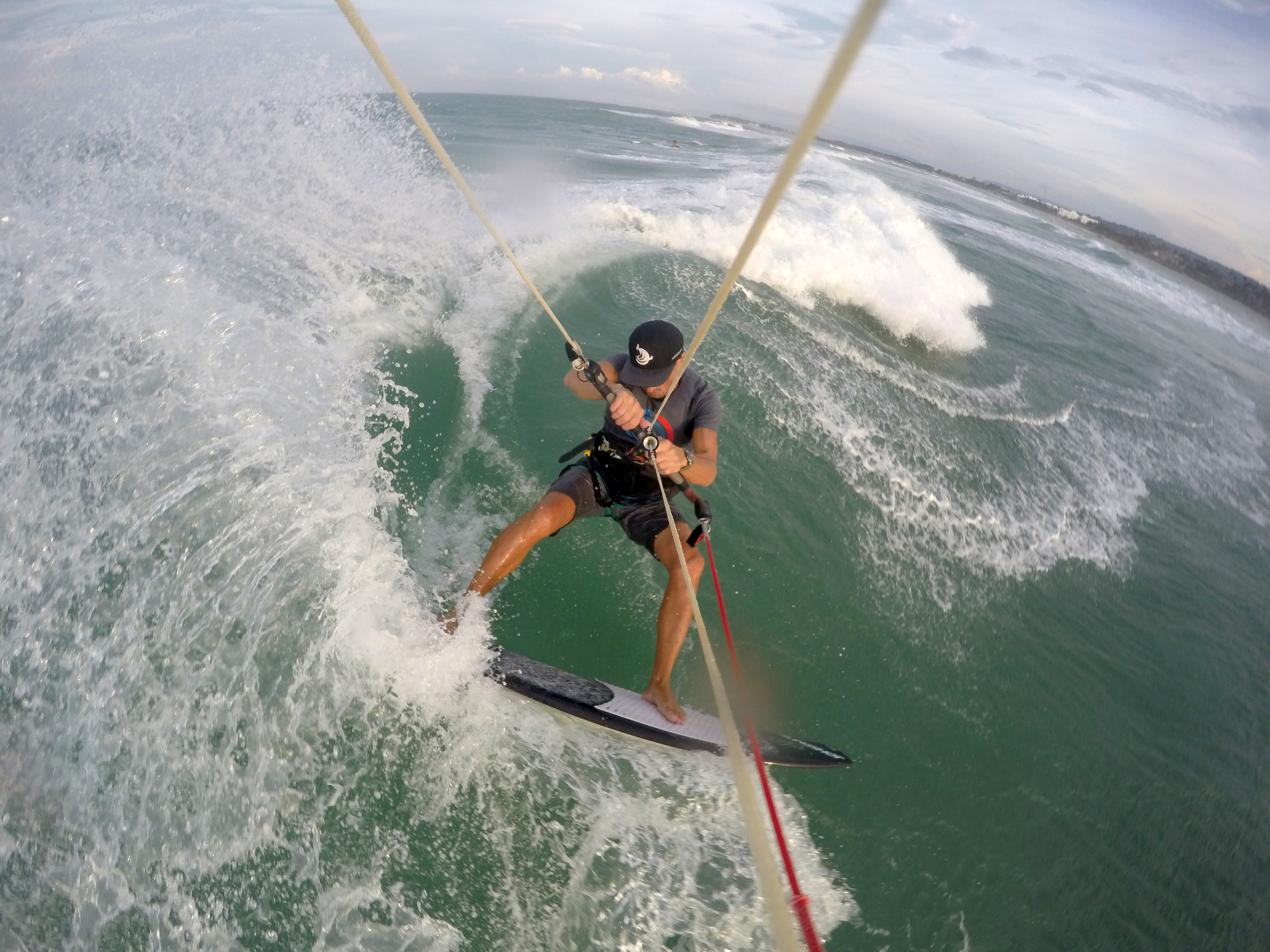 Launching and getting off the beach when it’s side offshore breeze is tricky. But once you make it to the wind line and it’s almost 30 knots, life gets a whole lot better. A whole lot.
Out over the reef small mountains race and crash across the coral. The waves are massive. Huge fully formed lines that stretch a kilometre long and they’re moving like a freight trains. It took twenty minutes just to adjust to the speed. I think I’m on a wave, and then it passes me like I’m standing there staring at it like a stupid tourist. Finally Oron and I figured out the timing and where they are breaking. Now that we’d solved the puzzle, it was show time. 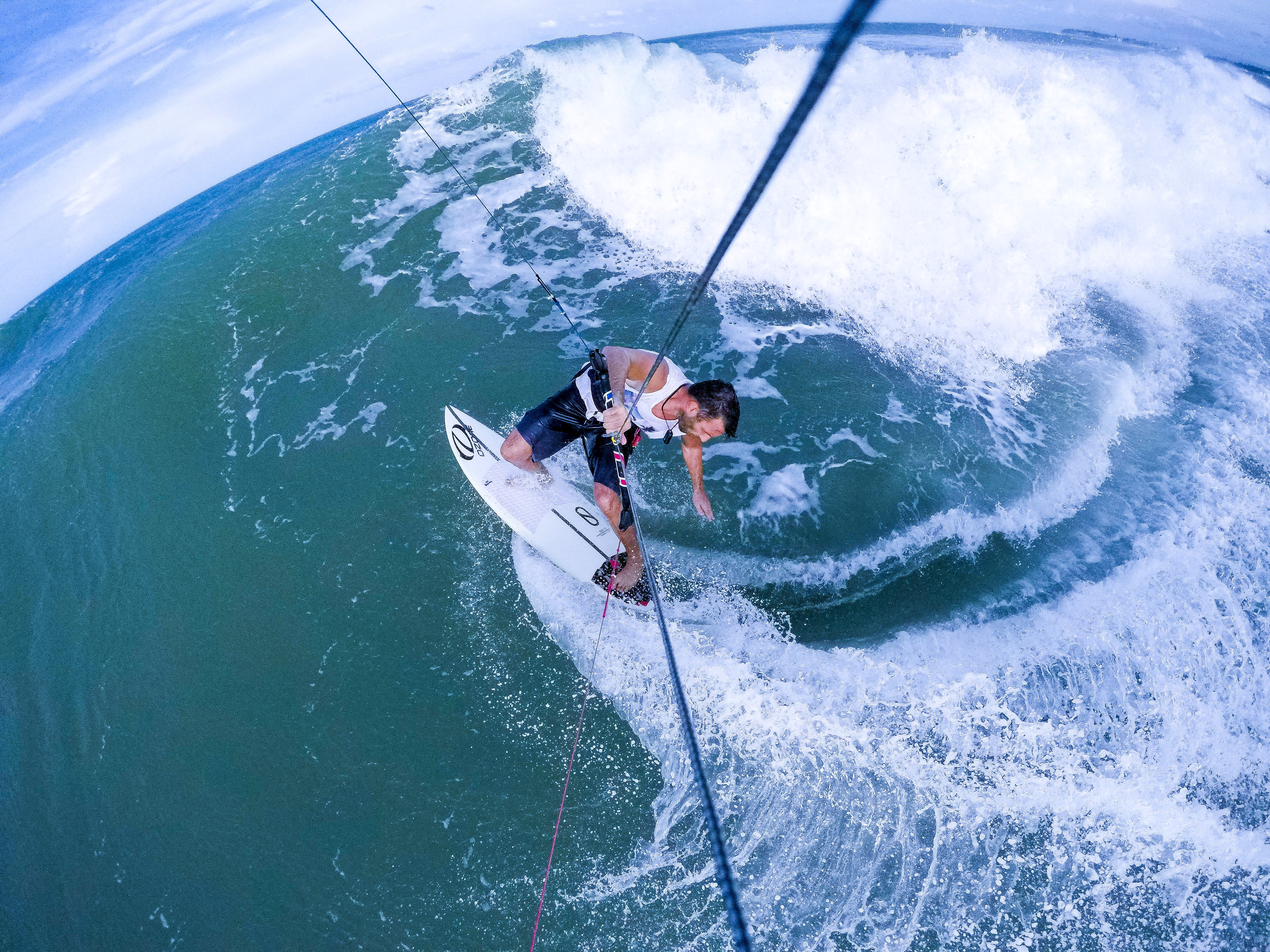 Only two of out kiting and for the next ninety minutes we had hands down the best session of the year. Lining up my markers on the beach between kite schools Big Willy’s and Dare 2 Fly, that was my toe side drop in to come back against the grain and rip down the line. I ride regular, Oron rides goofy. Too completely different styles and ways of riding waves in the same conditions. We ripped the heads off more perfect waves than I’ve seen perfect waves all year. The big ones we’re over fifteen foot faces, and the speed and power they possessed made it feel like Hawaii. It was sublime.
We rode until the sun was gone. Packed up on the beach and walked home in the dark with a grin from ear to ear. After that day, I think Oron and myself are the only two people in the entire Caribbean who actually enjoyed Irma’s visit. Most people today won’t agree with the following statement seeing the destruction that Irma and Harvey have brought in their paths; but I sure do love hurricane season.